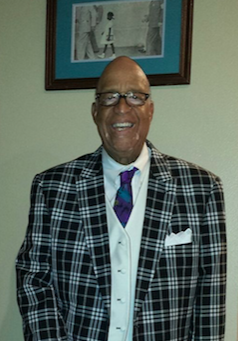 Join us on Friday, October 26, 2:00pm, at Wesley United Methodist Church, 1164 San Bernard Street, for a short presentation and reception honoring the Rev. Freddie B. Dixon, Sr., Ph.D. – as the Pecan Street Association and its board of directors presents Rev. Dixon with their 2018 Heritage Award.

It’s hard to think of the history of central east Austin, or, rather “East Austin,” without thinking of the beloved Rev. Dixon and his work to help its underserved residents and to enrich and preserve it.

The son of Bishop Ernest T. Dixon, the first African-American leader of the Southwest Texas Conference in the United Methodist Church, Freddie Dixon, born in 1944, pursued theology as a career, obtaining a Masters of Divinity from the Interdenominational Theological Center in Atlanta.

Besides becoming pastor of Wesley United Methodist Church in 1973 (the church’s roots predating the civil war), Rev. Dixon ministered to the community in a variety of ways, namely advocating on behalf of civil rights.  Known as the “Father of the Austin Area Urban League,” he co-founded the local chapter in 1976 alongside LaVonne Mason, and housed their offices in the basement of the church. This was par for the course that Wesley United Methodist Church physically served community needs outside of Sunday services. Before Huston-Tillotsen bought and developed the university acreage, the church housed most of the classes of what was then-known as Samuel Huston College.

The Austin Area Urban League’s first major undertaking was taking on Austin ISD and the disproportionate suspensions for students of color. Their groundbreaking work led to progressive legislative changes addressing discipline in schools. They went on to prevent the outright closure of AISD’s African-American junior high, Kealing Middle School, and instead moved the board of trustees to construct a new building for “Kealing Magnet School.”

The Church followed suit to help area students by setting up scholarship funds to assist seniors in post-secondary education.

Rev. Dixon secured the church’s inclusion in the National Register of Historic Places (as a National Site), while The United Methodist Church recognized it as a Historic Structure.

PSA Board Member Brian Joseph and Rev. Freddie B. Dixon

Meanwhile, the AAUL‘s services to the community expanded to include “minimal employment services, voter registration activities, GED preparation training, housing counseling and small home repairs to the current expanded employment placement services, workforce and technology training, programs in education, youth development, and emergency home repair….promoting parental involvement, community education that encourages greater participation in our government’s decision-making, and a climate of appreciation, cooperation and tolerance for all citizens.”  If there was a need, the AAUL filled it.

Rev. Dixon’s work wasn’t limited to the activities coming from San Bernard Street.  “As a relentless community activist,” he was a member of the Austin Black Assembly, which led the charge for the renaming of 19th Street to Martin Luther King, Jr. Blvd. – which culminated in an explosive city council meeting in 1975, where when Huston-Tillotson president emeritus J.J. Seabrook rose to speak but instead crumpled to the ground and our 2014 Heritage Award winner Emma Lou Linn, then a newly inducted councilmember, jumped into action and administered mouth to mouth resuscitation, although he unfortunately succumbed to a heart attack.

Rev. Dixon served on many boards (including Capital Area United Way and Child and Family Services, Inc.), and served on the Austin Planning Commission for six years…working to protect East Austin heritage.

Now retired as a pastor, Rev. Dixon serves as the Special Assistant to the Vice President of Diversity and Community Engagement at the University of Texas – Austin, where he has also donated much of his personal archives.

His latest venture as co-founder and chair of Six Square formalizes his ongoing work to educate on the African-American legacy of East Austin. “Six Square” denotes the six square miles referred to in Austin’s racist 1928 Master Plan (some Hispanics and African-Americans referred to it as the “Yes, Master Plan”), that was designed to increase segregation. They are soon placing historical wayfinding markers and will have a groundbreaking for a mural garden in the district.

As the Pecan Street Association continues to dig for the diverse history of East Sixth Street, we look forward to learning more from Six Square about the history of the area immediately east of us; the two quite integrated well into the start of the 20th century (with streetcars going back and forth), but torn apart by Jim Crow and the Interstate. We hope that the white influx into the district will also take note as gentrification serves to reunite the areas, for good or ill. We are at a juncture to either celebrate our diverse past or bury it.  We applaud those working hard to celebrate it, and it is with this in mind that we chose the Rev. Freddie B. Dixon, Sr., for our 2018 Heritage Award.